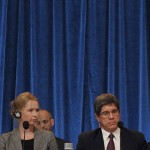 Peace talks began between Colombia’s government and the country’s largest rebel group, the FARC, one year ago today. Although the points of negotiations are far from settled, the negotiators are claiming progress.

The peace talks in Cuba represent the Colombian government’s 4th, and arguably most serious to date, attempt to settle the  long standing civil conflict that has evolved intrinsically with the country’s historical narrative of nearly constant political and economic violence starting well before 1964, when the first Marxist FARC guerrillas took up arms in what later became an attempt to violently overthrow the country’s government.

At the center of this peace process is in many ways an unlikely protagonist, President Juan Manuel Santos. Graduating university in the United States, and part of an elite political family, Santos has made peace with the rebels an “obsession,” gambling his political legacy on the process. Although he originally wanted the process “to take months, rather than years,” to ensure to tie down an agreement before launching his reelection bid, Santos’ still might have made the right bet, as the negotiators continue to reach progressive compromises.

Earlier this month, negotiators took a significant step forward after reaching a second agreement point out of a six point process, guaranteeing the political participation of the FARC in the event of an eventual peace deal. This deal is of particular weight because of the FARC’s traumatic political past; The guerrillas helped form a political party during peace talks in 1985 after which thousands of this party, the Patriotic Union, were assassinated by paramilitary groups, the armed forces and drug traffickers.

The political participation pact was not disclosed to the public. Both the FARC and government agreed that none of the partial agreements made ahead of an eventual final accord will remain classified and not take effect unless the negotiating teams come to a final peace deal.

The agreement on the FARC’s political future follows the first major breakthrough in May when negotiators reached a agrarian reform deal to address unequal land distribution in Colombia’s rural areas. Ongoing poverty on Colombia’s countryside and a general neglect of the country’s rural population is seen as one of the main reasons the FARC exists and is able to continue to recruit fighters.

A reform of Colombia’s highly unequal rural societies was not just a demand of the FARC; The United Nations had also called for far-stretching policy reforms aimed at reducing poverty, inequality, corruption and high levels of violence.

The next point in the peace accords will settle the FARC’s involvement in drug trafficking. Earlier this month, the negotiators decided to push this point up the agenda and discuss it ahead of the initial point of the agenda, the specifics of a permanent ceasefire and the FARC’s eventual disarmament.

Accords addressing this and the compensation and justice for the human rights victims of the conflict constitute the fourth and fifth agreements necessary before a final sixth agreement ratifies the entire process between the two parties.

In the event of a peace deal reached in Havana, Cuba, the terms of the deal would face a final test before the Colombian electorate for ultimate approval.

While many political parties, from the left to the right, have coalesced around the possibility of peace with the FARC, the talks are not free from detractors. Former President Alvaro Uribe with his far right-wing political following “Uribe Democratic Center” are running presidential candidate Oscar Ivan Zuluaga against Santos in the upcoming elections, criticizing the president for offering too many concessions to the rebel FARC.

Over the course of the conflict, fighting between the FARC and the government has left well over 200,000 Colombians dead, and millions more displaced. While the FARC started out to representing a Marxist-Communist political idealism, the decades of conflict reality, necessitated a turn towards kidnapping, extortion, drug taxation and illegal mining to fund its guerrilla operations.

Front runner to represent the liberal ticket in the upcoming election, former member of urban guerrilla group M-19, and expert on the peace talks,  Antonio Navarro, told Colombia Reports that regardless of how the FARC and the government’s peace agreement turn out, public perception and the attitudes of Colombians toward the guerrillas are going to take time to adapt.

“It will probably take at least a generation [to change the mentality and attitudes of the Colombian people about the FARC].  The FARC have to sign a viable peace deal…and regain trust…and fulfill promises…but then it will likely take a generation.”

But the senior Colombian liberal politician also explained that there are really no viable options other than dialogues at this point.

“This is the last armed conflict in Latin America,” said Navarro. “In Colombia only one of three things can happen: the government wins, the insurgents win, or a peace agreement is reached.”