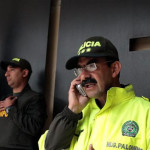 Christmas eve in Colombia has resulted in the death of 36 people, 103 injured and 185 arrested, police said Thursday.

According to a statement made by the boss of Colombia’s National Police, General Rodolfo Palomino, this is a significant decrease from last year, where 87 people were killed.

The general attributed the decline to the 175,000 police officers that worked on Christmas eve.

The police seized 61 firearms and1,821 knives throughout the night. They also confiscated 482 bottles of adulterated liquor and 273 kilos of gunpowder, which add’s to the more than 50 tons of explosive material already seized this month.