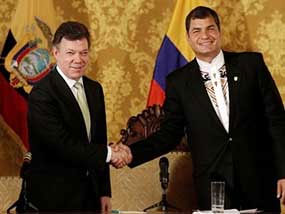 The 2nd Colombia-Ecuador Binational Cabinet meeting opened today in the southern city of Ipiales (department of Nariño) Monday with the presidents of both countries, Juan Manuel Santos and Rafael Correa, respectively. At the Champagnat College, the venue for the event, both presidents and their cabinet ministers will revise the fulfillment of agreements made by the first meeting of this type, which was held in December 2012 in Tucan, Ecuador.

They are also expected to coordinate actions to strengthen integration and development in the economic, social, border security, trade, energy and environment spheres, among others.

During the meeting’s opening, Ecuadorian Foreign Minister Ricardo Patiño highlighted the important progress made in the last months, and Colombian Foreign Minister Maria Angela Holguin thanked officials from both countries for their dedication and hard work.

The signing of agreements and a joint declaration by the two countries was expected this afternoon.

The two presidents are expected to inaugurate the International Bridge of Rumichaca which links the two countries. It was built eight months ago at a cost of nearly $5 million.