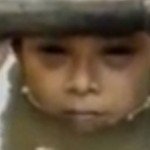 A 1985 avalanche that killed 25 thousand people in Colombia’s small central-western town of Armero was remembered Wednesday on the tragedy’s 28th anniversary.

On November 13, 1985, the town of Armero in the state of Tolima was getting ready to go to sleep, when an avalanche of a mixture of rocks, ice, mud and debris  dislodged by an eruption of a nearby volcano completely destroyed the town killing 25,000 people.

Armero was “the most prosperous town in Tolima.  We had five banks, businesses, industries,[sic] but the river and the mud destroyed everything, thousands of men, women and children were buried,” president of an organization to help rebuild Armero Gustavo Prado, told newspaper “El Tiempo.”

Unequivocally the most recognized figure of this disaster was a 13 year old girl named Omayra Sanchez.

Sanchez survived the initial avalanche, but found herself trapped underneath a brick door that was submerged under water.  Despite being able to talk with journalists and rescuers for three days with her head above the water, no one was able to save her and she died after 60 hours of being trapped.

The doctors determined that they could not free the girl without amputating her legs, but the lacked any surgical equipment to do this safely and determined that letting her pass away peacefully due to either hypothermia or infection was the only option.

French journalist Frank Fournier took a photo of Omayra while trapped that became instantly iconic.  The government came under huge scrutiny as many believed that Omayra could have been saved had the government responded quicker to the request for supplies.

President Juan Manuel Santos announced Wednesday that among other works of art, murals, and established tributes, there would be a park built in Armero to commemorate the life of Omayra Sanchez. The park will be erected in May of 2014.

“It will try to have a dignified place to hold the memory of so many Colombians who lost their lives 28 years ago,” said Santos while in the town.