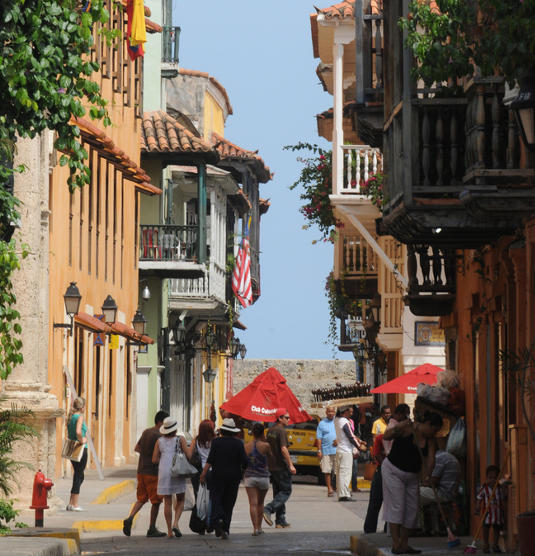 1. Megadiversity
Colombia is considered the second most biodiverse country in the world (following Brazil) and the most biodiverse per square kilometer. While only covering 0.8% of the globe’s surface it manages to be house to over 10% of the planet’s biodiversity. To put this in perspective, Colombia’s ecosystems are home to more than 1,821 species of birds, 623 species of amphibians, 467 species of mammals, 518 species of reptiles, 3,200 species of fish (18% of which are endemic) and a mind-blowing 51, 220 species of plants (nearly 30% endemic).

Colombia’s biodiversity, however, is expected to surpass these numbers since many areas of the country remain unexplored and new species continually surface.

2. “The Door of the Americas”
At the tip of the South American continent, Colombia’s location gives its inhabitants and tourists unique access to both the Atlantic (Caribbean Sea) and the Pacific Ocean. Apart from it’s renowned tropical beaches, the country can offer visitors a chance to explore the Amazon rainforest, climb the Andes or Sierra Nevada mountains (including the country’s snowy peak, highest point, and the world´s tallest seaside mountain Pico Cristóbal Colón), journey through tropical grasslands, trek through the Tatacoa Desert, and more.

3.Beautiful Women
It’s no secret that one of Colombia’s best known treasures are its women — it’s very beautiful women. While beauty of course remains in the eye of the beholder, whether its on the Miss Universe stage or on the small screen, Colombianas like Sofía Vergara, Shakira, and Danna García are always sure to turn heads.

4. Emeralds
Colombia is known for exporting many things, but did you know the South American country is responsible for more than 60% of the World’s emeralds? That’s right, it’s likely that the green gem in your jewelry box originated from the Emerald deposits of Muzo in Colombia. Known for it’s deep green color and brilliance, Colombia’s emeralds are some of the most sought after in the world.

5. Pick A Climate, Any Climate
While many know the country as a tropical paradise due to its location near the Equator, its rich ecosystems are possible due to its varied climate zones (rainforest, savanna, steppe, desert, mountain climate, etc.)

There are no striking seasonal changes throughout the year and Colombia’s temperatures vary based on elevations and rainfall. Climate in the South American country can vary greatly, from it’s sea level tierra caliente (hot land) temperatures of 75.2- 100 °F and it’s cooler temperatures 3,000-6,500 feet above sea level of 50 and 66.2 °F to it’s tierra helada above 14,764 ft where temperatures fall well below freezing.

But don’t worry, about 86% of the country has the tropical climate known and loved by those wishing to visit a sunny paradise.

6. The Best Coffee In The World
Ahh yes, if there’s one thing Colombia has always been synonymous with, it’s delicious freshly ground coffee. The “Eje Cafetero” (Colombian Coffee-Growers Axis), also known as the “Triángulo del Café”, located within the Caldas, Risaralda, and Quindío departments is home to what many consider the best coffee in the world.

Fun Fact: The figure of Juan Valdez that represents the National Federation of Coffee Growers of Colombia is not based off a real person. The fictional poncho-wearing character widely referenced abroad (remember that scene from “Bruce Almighty”?) is simply used to represent Colombian coffee farmers.

7. The River That Ran Away From Paradise
The world is full of amazing rivers and lakes. But one in particular really stands out. Caño Cristales, commonly referred to as ‘the river that ran away to paradise’ is a famous body of water in Colombia. Residing underwater is a range of rocks covered in green moss. But for a period of time from September to November, the water level dips allowing the sun’s natural heat to warm that moss covering the rocks. As a result, blooms grow beneath the water, ranging in all shades of colors.

8.Se habla español…y muy bien
While the Spanish language may have its roots in motherland Spain, Colombia’s Spanish is considered by many to be the “clearest” in the world. This may vary, however, when you travel across the country. In general, Colombians don’t have a strong accent — especially those living near the country’s capital, Bogotá. 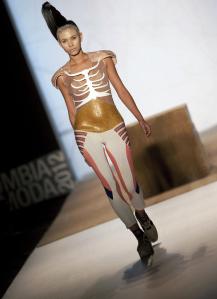 9. The Fashion Capital Of Latin America
“La ciudad de la eterna primavera” (the city of the eternal Spring) says plenty about the beauty of Colombia’s second biggest city, Medellín. Once known as the home of the ruthless drug lord Pablo Escobar, its thriving textile industry has helped shed its past reputation and replace it with a growing fashion industry. Known by many as the “Fashion Capital of Latin America,” Medellín hosts two important annual fashion shows: Colombia Moda and Colombiatex.

10. The Value of Rest
Only bested by Argentina, Colombia has the second highest number of national holidays in the world. With 18 public holidays and an average of 15 paid vacation days, it’s clear that this South American country values rest. In comparison, the U.S. has 10 public holidays and about 10 paid vacation days. Most Colombians take advantage of the long weekends offs, also known as “puentes festivos,” to travel within the country with friends and family.

11. A healthy body is a happy body?
Since 1974, on Sundays and national holidays the country’s capital closes it’s usually congested main roads to give Bogotá’s residents a chance to walk, run, bike, skate, skip, hop, etc. In other words, from 7 AM to 2 PM Colombian families and tourists can use the over 75 miles of asphalt as their playground.

The capital city, Bogotá, has the most extensive network of cycle routes in Latin America (and is a competitive force for the top spot in the world)

12. Full Belly, Happy Heart
Ajíaco, Sancocho, Bandeja Paisa, Mojarra — might be the real reason Colombians need the Ciclovías to exercise on the weekends. With delicious typical stews hailing from different corners of the country, Colombians hardly lack gastronomic splendor. Staples of the country are red beans, rice, arepas, empanadas, plantains, among others. But when that plate is cleared off don’t forget dessert! Arequipe (caramel-like spread) with brevas (figs) or obleas (this wafers) are a favorite, otherwise Arroz con Leche (rice pudding) or buñuelos (cheese fritters) can top off any meal! 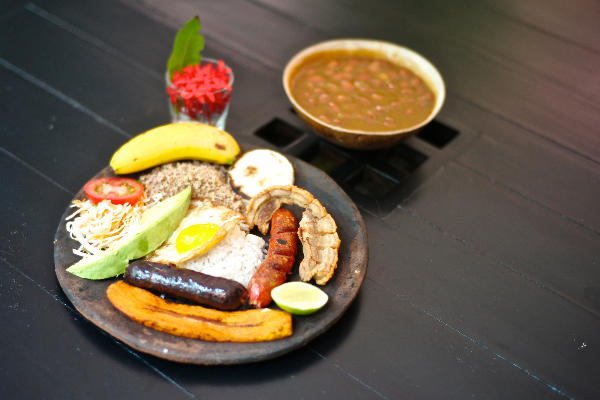 Pictured is a Bandeja Paisa

Colombia’s third most populous city, Cali, is not only one of the oldest cities in the Americas, but La Capital de la Salsa (World’s Salsa Capital). With significant differences from other styles of salsa, “Salsa Caleña” is known for its quick footwork with a mostly still upperbody. Dancers’ steps are backwards and forwards or diagonal, rather than the side-to-side movements seen in other styles.

But Colombians do more than dance Salsa, the country is most well known for both it’s Cumbia and Vallenato genres.

14. Nobel Prize Winning Literature
Perhaps Colombians are simply happy about the rich culture of their country. Nobel Laureate and novelist Gabriel García Márquez is perhaps the most well known figure in Colombian literature. Author of “One Hundred Years of Solitude” (1967) and “Love in the Time of Cholera” (1985), his works have not only been critically acclaimed but have made “Gabo” an icon within the Magic Realism genre. 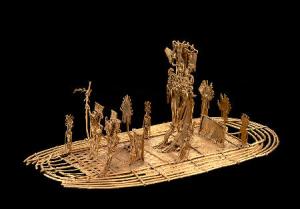 If you’ve ever heard of the Legend of El Dorado, then you know of Colombia’s Pre-Columbine history. The original narrative told the story of the Muisca people who used Gold not as a symbol of material wealth but as a sacred metal for religious offerings. The story describes the famed El Dorado ceremony which welcomed the new cacique (chief). Covered in gold powder, the chief would travel atop a raft with emeralds and gold at his feet. Later he would dive into the lake with his offerings as bystanders cheered. The riches of the Muisca people quickly fell in the hands of the Spanish conquistadores upon the “discovery” of the New World and would spur the legend of a city built entirely of gold and gems among Spaniards hoping to find more riches.

Bogotá’s International Airport “El Dorado” was named after the ceremony, and gold artifacts, like the Muisca Raft, can be found in the capital city’s Museo del Oro (Gold Museum).

16. Fútbol With Heart, On It’s Way To The Top
United by their love of fútbol — Colombians rarely miss a chance to socialize over a good soccer match. Whether it’s celebrating for La Selección Colombia or facing defeat, Colombian wear their yellow, blue, and red with pride.

Over the past months, Colombian soccer star Radamel Falcao, from the Club Atlético de Madrid, rose to prominence as he led both his club and national teams to stunning victories. Recently El Tigre (The Tiger) became the first player in a decade to score five goals in a La Liga (Spanish club league) match. The footballer’s impressive performance has also helped the Colombian national team become a competitive force within the South American qualifies for the 2014 FIFA World Cup in Brazil. 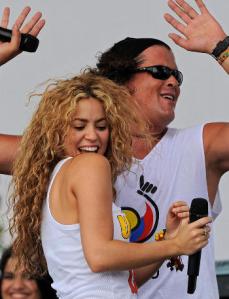 17. Stars That Shine Bright
Despite all of the country’s qualities perhaps what shines the brightest internationally are its stars. From the charitable Juanes and Shakira and the hilariously sexy Sofía Vergara to the musically talented Fonseca and Carlos Vives — coffee may no longer be Colombia’s most well known export.

18. In Love With The Chubby
And for all those chubby-loving art fiends, Colombian artist Fernando Botero’s work is nothing short of innovative. His figurative style “Boterismo” is characterized by portraying subjects in exaggerated volumes. His works are known to depict chubby women, men, children, animals, and even still-life in daily life with a sense of humor. Botero has also taken classics, like Leonardo Da Vinci’s Mona Lisa, and given them his own unique touch. 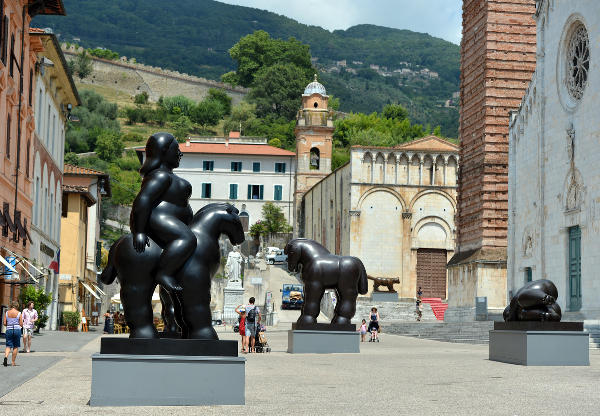 Photo: Sculptures by Colombian artist Fernando Botero are displayed in a square of Pietrasanta in Tuscany, prior to the opening of an exhibition on July 6, 2012. The exhibition entitled ‘Fernand Botero: designer and sculptor’ unfolding between the squares and streets of Pietrasanta will show 80 sculptures and drawing from July 7 to September 2. AFP PHOTO / GABRIEL BOUYS (Photo credit should read GABRIEL BOUYS/AFP/GettyImages)

19. The Oldest Democracy
Despite having been ravaged by almost a half a century of violence at the hands of drug cartels and rebel groups, Colombia is actually Latin America’s oldest democracy.

In August 2012, President Juan Manuel Santos announced a fourth attempt at ending decades of violence and a culture of impunity by entering peace talks with the FARC rebel group.

20. Festivals, Festivals, Festivals
It’s not enough to have astonishing biodiversity and ethnic diversity — you need to celebrate it. Colombia has the worlds biggest theater festival (Festival Iberoamericano), salsa festival, flower parade. It also has the second biggest carnival in the world!

21. An Emerging Global Player
Colombia’s real GDP grew 5.7 % in 2011 with inflation at 3.7%. TIME magazine said it best when they featured the Colombian President on the cover of their international edition in April 2012, “The Colombian Comeback” is “From nearly failed state to emerging global player — in less than a decade.”