20th of January Festival returns to the Sucre capital 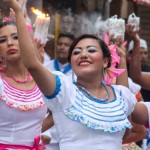 Sincelejo once again is hosting its yearly “20th of January Festival,” otherwise known as the “Festival of the Sweet Name Jesus.”

A national cultural heritage, during the festival the Sucre State capital comes alive to the sound of traditional porro and fandango music, while the streets are filled with parades and queens participating in the renowned Popular Beauty Contest.

The “happiest festival in Colombia” was kicked off on January 7  with shows of folklore, gastronomy, porro music and fandango dances, and will carry on until the day which gives it its name, January 20.

“The aim of these celebrations is to emphasize the true value of these cultural traditions by reinforcing events such as Veintenerito [children’s procession], cavalcades and folkloric parades … and the Popular Beauty Contest, which will highlight the skill and performance ability of fandango by the beauty queens,” said the mayor of Sincelejo, Jairo Fernandez Quessep.

Wednesday will see the dance-based pageant get under way, with contestants flaunting their traditional dress in the bathing suit, fantasy and artisan costume parade.

Quessep revealed that the most talented will receive significant prizes, as the winners of the traditional fandango competition will walk away with US$2,000, while second and third place will receive $1,500 and $1,000 respectively.

“Fantasy” fandango winners will also be awarded money prizes, as will the best dressed participant in the float parade.

Thursday will be the day of the great Coliseo de Ferias parade, while on Friday the crowds will gather in the General Cemetery square from as early as 5 a.m. to see the Pola Becte daybreak procession, while as night falls the “Central” Queen will be crowned.

The festivities conclude on Sunday, with bandstands livening up the north and south regions of the city.