’2014 we hope will be the year of peace’: President Santos 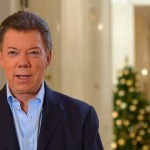 In his New Year’s speech to the country Monday, Colombian President Juan Manuel Santos reflected on the successes of the past year and the promising future with which the country enters 2014, emphasizing the hope for peace in a not too distant horizon and the reassuring statistics against unemployment and inequality.

“The year 2014 we hope will be the year of peace, the one marking the end of the armed conflict which has been bleeding us dry for half a century now,” Santos said to the people, in a reference to the peace talks that are currently taking place in Cuba between the country’s oldest rebel group, the FARC, and the Colombian government.

The Head of State clarified that for this key objective to be achieved, all of society must play its role.

“This is not only an effort by the government, not only by the President, but by all Colombians, us 47 million people who don’t resign ourselves to continue suffering through violence, who don’t want the number of victims to continue rising in our country.

“In other words, it will be a year of crucial defining moments for the country, in which now more than ever we need the social harmony and unity of all Colombians, in the respect of differences and other people’s opinions.”

Santos said that since as far back as he could remember, “during these celebrations us Colombians traditionally exchange cards with a repeating wish: ‘Peace and Prosperity for the New Year.’”

“And so today, for the first time in a long time, I believe that these two words are no longer just words, but that they could be – and they are beginning to be – a positive reality, a tangible reality in our country.”

Santos’ positive position comes after a year which has left behind many encouraging notes for the South American nation to continue along the same progressive path of development.

“The past year leaves us many reasons for hope and many reasons to continue working, as the further we advance, the more conscious we are of how much we still need to go.”

On this occasion, the President highlighted the many achievements the country has undergone over the past year, specifically in the battle against unemployment, poverty and inequality.

“How great it is to be able to say that we are ending the year with the lowest unemployment rate in a long time, with more than two and a half million jobs created since August 2010!” he told the nation.

“How great it is to say that we are ending the year as one of the Latin American countries which has reduced poverty and inequality the most!”

Santos further stressed that of all South American countries, Colombia has witnessed the most economic growth, as well as advancing investment-wise and infrastructure-wise, and reducing inflation.

“How great it is to say that we are ending the year with the highest level of investment in history; ready to start building the super highways that will change the face of our land, and with the lowest rate of inflation we can remember!” he said.

The Head of State also reminded that Colombia is “even more respected on an international level” for making significant improvements in a social context over 2013.

“[The state has been] building more social housing than ever before, and connecting all the country’s municipalities to internet and fiber optics.”

The government has furthermore been “reducing the price of medicine and including more treatments in Colombians’ health plans, and with all our children and youth in official schools studying absolutely free.

“This is a Colombia that is preparing for a great transformation: to leave behind violence and conflict, and build a country of prosperity and opportunity for all Colombians.”

Santos concluded his message to the people with a sentiment of optimism and anticipation for what 2014 will bring.

The post ’2014 we hope will be the year of peace’: President Santos appeared first on Colombia News | Colombia Reports.