2013: The Year Of Social Protest And Repression In Colombia (Pt 2) 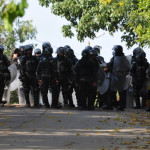 Is there a formula to describe why and how governments repress people who take to the streets to protest? Can we make sense of why tanks, anti-riots police and chemical weapons are often and increasingly used to control populations who speak truth to power?

Indeed, there is one, and it involves a crucial component: legitimacy—the popular acceptance of an authority, whether a governing law or a regime. In Colombia, the government’s legitimacy was weak in 2013, which gave rise to an unprecedented number of protests motivated by a heterogeneous set of reasons. Despite mobilizing against different issues, most shared the common challenge of governmental repression.

Concretely, if those most affected by a policy perceive such policy to be fair, legitimacy is high. In that case there is no need for coercion. When the policy is perceived as unjust, however, states use coercion to fill in the void that the lack of legitimacy leaves behind. By the very principles upon which nation-states are founded, physical force will be used against the population to repress dissidence and legitimize the current rulers’ decisions.

The formula: repression will be high when policies are unpopular.

Multiple policies were extremely unpopular in 2013: national security, mining, healthcare and agricultural production. In fact, I argued in an earlier piece, that protests were awakening a new kind of citizenship, one that is bringing Colombia closer to the real and more substantive meaning of democracy: government in the interest of the governed beyond mere representation. Yet, despite the encouraging rise of a new citizenship, there were extremely high indexes of protest repression that killed over a dozen people and imprisoned thousands.

Following the above formula, it is important to explain how the loss in government legitimacy shown in Part I nurtured a shocking rise in governmental coercion. In this article I hope to  amplify the voices of activists who have denounced a disproportionate and inhumane rise in repression and the threat against the right to protest it constitutes. I also aim to pose the question: how much repression is legal, humane and democratic?

At a hearing at the Inter-American Comission on Human Rights (IACHR) on October 31st , a set of human rights lawyers advanced a lawsuit against the Colombian state for having repressed social protests in 2013 through illegal means. The petitioner party argued the state used unlawful techniques to repress the Catatumbo, the Agrarian Strike and the Minga Indígena protests, including police and military brutality, unfounded imprisonment of protesters, and stigmatization of protests’ leaders via terrorist labeling.

The repressive strategy was two-fold, it focused on physical aggression and the use of the criminal (in)justice system. That is, the Colombian security forces and Ministry of Defense triggered the death of over a dozen protesters and over-imprisoned demonstrators. During the three major mobilizations mentioned above, fifteen people were killed (twelve shot by assault weapons and three dying from inhaling teargas), while almost 3000 people were detained for demonstrating. Specifically within the Agrarian Strike, 837 people were imprisoned, though today only 60 people remain in custody. In other words, 777 people were imprisoned in August for no other charge than vividly protesting against the state.

Repression of social protest also took means other than physical containment: For one, the Ministry of Defense delegitimized the Catatumbo protests by asserting the leaders were FARC infiltrators. Additionally, police officers stole food, treated people cruelly, attacked journalists (see the Foundation for Freedom of Press (FLIP) report) and used unauthorized weapons such as rocks and firebombs during the largest nation-wide protest—the Agrarian Strike. These alternative methods restricted people’s right to protest, a right that encompasses several other important rights such as freedom of expression and assembly (See special video coverage of police brutality)

The initial repression formula, thus, takes on newer factors: the government will kill, imprison, stigmatize and go beyond legal coercive means to fill in the legitimacy void.

Filling in the void of legitimacy is also a juicy international business. The world’s largest teargas producer is located in the Jamestown, Pennsylvania, reminded us a prominent Colombian investigative journalist the day following the largest mass protest in Bogotá. The reporter calculated that the Colombian government pays Combined Systems, the teargas company, approximately 13 dollars for every teargas cartridge that it purchases to repress protests and riots. His conclusion: the worse the world has it, the better Combined Systems does.

To no surprise, The United States, Israel, Egypt and Colombia are Combined Systems’ top customers. Such list gives us an idea of the scale at which Colombia is engaged when it comes to repressing dissidence. Egypt’s former President Mohamed Morsi is currently on trial for allegedly inciting the killing of protesters  outside the presidential palace in 2012, while US violent and unjustified repression of Occupy Wall Street protesters in 2011 is now a well known fact. Finally, Israel’s apartheid style colonization of Palestinian territories has been documented over decades, specifically its 2010 use of illegal high-velocity teargas projectiles. Colombia shows a similar tendency, having purchased tons of anti-riots monition since it realized protesters were on the rise in 2007. The uses of these costly coercive tools clearly stand out as the means to stabilize injustice worldwide.

Such context gives the repression formula additional dimensions: a decrease in legitimacy will increase coercion proportional to the amount that teargas producers profit from repression.

Buying monition, however, is incomplete unless a legal framework justifies the use of weapons and coercion. The Colombian government knows this fact and has therefore promoted a set of anti-protest laws.In fact, repression of social protests has taken several legal means in the last few years.

Legal means are often the most dangerous vectors of repression because they empower state authorities to justify their violent attacks. Specifically, the bill known as the Citizen Security Law (No. 1453 passed in 2011) criminalizes the blocking of roads. Yet, blocking roads is to protesting as swallowing is to eating. “If a protest doesn’t block a road, it would be a convention or a seminar,” said plaintiff Jomary Ortegón at the IACHR hearing.

Beyond directly contradicting the right to protest and criminalizing any kind of assembly protesting for a cause, this Citizen Security Law provides the legal rational for state repression. If the law is upheld, the natural means for protesting will be placed under legal restrictions, which will further legitimize the government to crackdown on protesters regardless of social movements’ demands and grievances.

“Protest beyond the law is not a departure from democracy; it is absolutely essential to it.”

This year, the Ministry of Defense also advanced anti-protest laws. Law 091 reforms the procedural penal code, worsening the punishment for road blocking. In this amendment, people who collaborate with protesters and wear hoodies (which is very common for university students who participate in them) may receive an additional punishment. Such a reform also empowers the police to make decisions that would otherwise fall under judges’ hands, such as determining whether the potential student-protester deserves an increased punishment.

This penal code reform scarily allows a crackdown on protesters based on ridiculous nitty-gritty details while missing the point on why some people may cause damages to public infrastructure. Concretely, as current presidential candidate Clara Lopez claimed, “authorities should not hide behind the fact that vandalism is not criminalized, but instead [authorities should] advance investigations on the facts and identify those who have paid youth to commit abuses with the overall goal of delegitimizing social protest.” Such an emphasis would also explain why several police officers instigated protesters by throwing rocks at them as photo records demonstrate.

Lastly, the National Police Code allows officers to stop people “to protect them” if they happen to be in a “state of exaltation” at the time of an aggression at the protest. In other words, if there is a violent incident at a protest, a police officer is allowed to detain someone who is upset, nervous or belligerent. Yet, rather than protect the person, this law legitimizes unfounded detention of protesters and creates a chilling effect on others who also participate in the demonstration.

Legal manipulation, thus, boosts repression rationales and adds the last portion to our formula: governments will criminalize the means of protesting and attempt to control behavior and clothing through legal, instead of people’s, legitimacy.

The Colombian government increased physical repression against protesters in 2013 to fill in the void of legitimacy produced by extremely unpopular public policies. To repress these protests, the state killed, imprisoned, stigmatized and went beyond legal coercive means while also fueling a juicy teargas production business. On top of it all, the ministry of defense advanced a set of laws that criminalize the right to protest, in an attempt to legitimize its repression through the law instead of eradicating the reasons for why people would take to the streets in the first place.

2013 is over. Though, repression will for sure not be and neither will social protest. If our formula is correct, declining legitimacy will increase governmental repression in 2014 as people take to the streets. For now, concerned citizens and independent thinkers can either hope legitimacy will increase— hopefully for structural reasons and not mainstream media or statistical manipulation—or denounce these repression strategies as governmental legitimacy continues to erode.

The post 2013: The Year Of Social Protest And Repression In Colombia (Pt 2) appeared first on Colombia News | Colombia Reports.