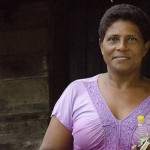 Adriana Maria will pass another year in “the Canyon” of San Cristobal, a conflict-ridden rural neighborhood of Medellin where she has lived her entire life and once again she recounts another year where violence and conflict touched her family.

Maria, with dark skin and sharp eyes, is the toughened matriarch of her family. In her home live three women, all working minimum wage jobs to support 9 children. Through decades of urban warfare that has plagued her neighborhood that borders the Comuna 13 and the rural zone of San Cristobal, Maria has withstood countless hardships and tests, facing a seemingly interminable conflict that continues to take the lives of neighbors, friends, and family members.

Maria tells the story of this year in particular where the violence nearly removed her and her family from their home. On May 5, 2013, Maria was sitting on the front porch, as she does every Sunday, taking time to relax with her family after a full week of hard work cleaning homes, when she noticed a couple of “kids” with guns pull up in a truck  in front of the home.

The two men, on orders to secure the strategic zone of the city for illegal drugs and arms smuggling, exited the truck, pointing the guns at her family, telling them they had until 4 p.m. the next day to vacate their home or “they would kill them all.”

In the following days of tumult, as her family scrambled to remove their belongings, Maria remembers the tears of her 76-year-old mother, sick with the fear and sadness, her frail body unable to withstand another insult added to a lifetime of transgressions perpetrated first by the guerrillas, then the paramilitary, and now the splinter groups of armed actors with shadowy ties to organized crime.

Maria recounts with bitterness, the guerrillas moving into the neighborhood, demanding food and collaboration in their struggle against the government, and killing her brother when he failed to comply to their demands.

Following the departure of the guerrilla came the paramilitary, who removed Maria’s only son out of school to join their ranks, and threatened death when she attempted to resist their demands.

During her years in the neighborhood, her family has become familiar with gun fight forcing her to throw herself with her children under the bed to avoid being hit as bullets shattered the walls of her home.

Today, it’s not exactly clear who the men with guns belong to. According to the Medellin Mayor’s Office, the armed group who perpetrated the displacement was called “Bellavista” and received support from the “la Oficina” – the Medellin-based crime organization that formed in the aftermath of the death of Pablo Escobar.

Reportedly, another organized group of illegal drug and arms smugglers “los Urabeños” expanded into the zone in recent years, attempting to secure control of the strategic supply route through Medellin and the Tunnel to the West that runs to the ocean and other regions of the country.

In the events that removed Maria and her family from her home, the armed group removed a total of 99 families, totaling 365 individuals, from “the Canyon” and the adjacent neighborhoods between San Cristobal and Comuna 13.

While forced from their homes during the month of May, by June the government of Medellin had secured the return of the majority of the families to the neighobrhood, under police and military protection.

Today the victims are receiving support from the Medellin Victims’ Attention and Reparations Department, who visit the town multiple times through the week and spend the weekends in the neighborhood with the families.

They are helping the families to recover by investing in the economically beleaguered neighborhood. Throughout the steep hills, signs on the houses decorated with lights and festive ornaments proclaim government protection programs for residents, while  new roofs are being erected and emotional therapy support is being offered to the residents.

Maria expressed gratitude for the government’s support following the displacement, but continues to harbor concerns about what would happen if the programs were ended and the military and police abandon the area as they have done in the past.

Maria is quick to condemn the guerrilla, and the paramilitary. She questions the peace talks with “deceitful” guerrillas, proclaiming the futility of the government process after all the pain and death the guerrillas have inflicted upon the Colombian people.

“God forgives, but we are but humans and will never forget what the guerrillas have done to our family,” said Maria. “They killed my brother, and I will never be able to forget that.”

Nonetheless, when asked what she hopes for the coming year, Maria wishes for her “family’s survival” and an “end to the violence.”