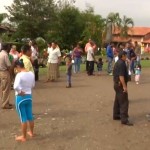 Two hundred people fled their homes in the wake of a guerrilla offensive in southwest Colombia, the military reported on Sunday.

The evacuations came after a civilian was injured by a mortar shell launched last Friday by fighters from the Sixth Front of the FARC rebel group, Colombian Army Colonel Wilson Cabra told the El Pais newspaper.

The attack was aimed at a military base in the municipality of Miranda, in the south-western Colombian state of Cauca, but instead hit homes.

The base is home to Colombian soldiers from Task Force Apollo, which started operations targeting FARC operatives in Cauca last Thursday.

87 families are thought to be part of a general exodus from the area, according to military estimates.

The attack comes only two weeks after the FARC rebels and the government came to the second major agreement of ongoing peace talks.

No ceasefire was signed prior to the start of negotiations in Havana nearly one year ago, and the rebels remain in active conflict with the Colombian state in various parts of the country.