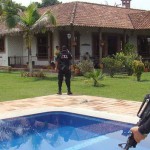 Colombia’s National Police force seized an estate belonging to Victor Daniel Gonzalez Reina in Cartagena this weekend, after a lengthy investigation indicated it had been paid for using profits from the sales of illegal narcotics, reported national media on Sunday.

The property, reportedly valued at $200 million, is located in an exclusive neighborhood in the coastal city of Cartagena and covers an area of 2.8 square miles, including private access to the Caribbean Sea.

A two-year joint investigation carried out by Colombia’s National Police and the United States Drug Enforcement Agency (DEA) determined that Gonzalez had acted as a front man for the now-defunct Norte de Valle Cartel and acquired the property using illegal drug money.

Once one of the most powerful narcotics organizations in Colombia, the Norte de Valle Cartel rose to prominence the 199os by incorporating elements of the Medellin and Cali Cartels, but has since fallen apart following the extradition of its former leader to the United States in 2012.

Police now claim that Gonzales served as one of the cartel’s most active front men since 1985, laundering large sums of money through a sophisticated system of shadow companies.

Gonzales also reportedly purchased a number of other properties in the northern state of Bolivar, and used such real estate activity to legitimize drug money by transferring it from one cartel-owned company to another.