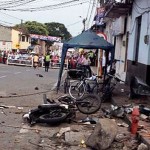 A bomb detonated in western Colombia Thursday, killing two people, including a police officer, and injuring more than 30, according to a national media outlet.

Initial reports allege that the FARC, Colombia’s largest rebel group, was responsible for planting the bomb, which was attached to a motorcycle and exploded Thursday morning in front of the Municipal Government’s Office in the center of Pradera, a city located in the state of Valle del Cauca.

Valle del Cauca Chief of Police Colonel Mariano Botero Coy told Semana reporters, “it is a fact that the motorcycle explosion occured at 9:10 AM. It has initially injured five people. Two are seriously injured, including a policeman.”

Mayor Adolfo Leon Escobar reported that the attack left one dead and about 20 injured, according to Semana. The local official has previously voiced his concerns regarding a potential FARC attack in the city.

The 6th Front of the FARC maintains a strong presence in the area, but it has still yet to be confirmed whether the rebel group is indeed responsible for the bombing.

The incident comes just one day after the FARC ended a month-long unilateral ceasefire, during which violence pertaining to the Colombian armed conflict dropped significantly.

The FARC has been negotiating a potential peace agreement with representatives of the Colombian government since November of 2012. Held in Havana, Cuba, the peace talks are currently entering the third of six planned agenda topics, the cultivation of illicit narcotics.