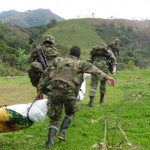 At least 11 members of Colombia’s largest rebel group the FARC were killed on Sunday by an air force bombardment of their camp in the municipality of Tame, in the western state of Arauca, according to local media reports.

The attack is greatest blow the FARC has suffered since lifting their unilateral ceasefire last Wednesday.

The guerrillas belonged to the Mobile Column Alfonso Castellanos of the FARC’s 10th Front. Among the dead it appears is the commander of the unit, Omar Guevara Rivera, alias “Flanklin,” who was the objective of the mission.

According to local media Radio W, authorities unofficially counted one wounded soldier and three helicopters impacted by long range weapons in the attack, although the air force has yet to release official figures.

The attacks come as the government and the FARC return to peace talks in Havana, Cuba. In the 19th round of talks which started last week, the FARC have returned with a proposal to legalize and regulate drug cultivation in Colombia.