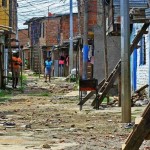 A 10-year-old child from Cali has been taken to hospital on after being stabbed ten times, allegedly for crossing a territorial border imposed by gangs, local newspaper El Pais reported Friday.

The incident took place in the El Vallado neighborhood in the troubled southwestern 15th District of Colombia’s third largest city.

A family member told El Pais that the boy was walking through the neighborhood when he was called over by an alleged gang member who subsequently stabbed the child ten times.

The southeastern districts of Cali are a hot spot of gang activity and locally infamous for it’s excessive violence rates.

To enforce their authority over disputed territory, gangs in Colombian cities sometimes disallow locals to travel from one neighborhood to another out of fear of infiltration or territorial offensives.

Cali is the only of Colombia’s big cities that has seen its homicide rate go up over the past years, while those of cities like Bogota and Medellin have gone down.