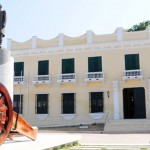 Restoration at Colombia’s Casa Museo Bolivar, where Latin American independence hero Simon Bolivar lived during the last months of his life, has been completed, with a final price tag of $1.2 million, according to local media.

It was in this colonial-style mansion, located in the municipality of Soledad in the state of Atlantico near the Caribbean coast, that “El Libertador” began to say goodbye to his life, sharing his aspirations for the newly independent South American states with his followers, according to the El Heraldo newspaper.

State Cultural Secretary Deyana Acosta told the newspaper that the renovations will improve the appearance of “the corridors with their wide arcs and thick columns made of stone. The floors were reconstituted using tiles from a colonial style; in the patio the original elements were conserved such as the gargoyles in the facade.”

The Casa Museo Bolivar, will house an interactive gallery, learning rooms, and a museum dedicated to the Liberator. Renovation of the colonial mansion was spread over 67,913 square feet.

The process did not begin until 2010, though the building had been declared a National Monument in 1970 by former President Carlos Llera Restrepo.

Simon Bolivar (1783 – 1830) is recognized as one of the great figures in Latin American history, leading the region’s successful struggle for independence from Spain along with his southern counterpart, Jose de San Martin. Bolivar united the present-day nations of Colombia, Venezuela, Ecuador, Peru and Bolivia under his vision of a Gran Colombia.